Irish-international fintech company, Fexco has opened a new building in Killorglin, Co Kerry, which will house its own Research Development and Innovation Centre, and RDI Hub – a world-class centre for digital innovation focused on commercialisation of innovation and research-backed by Fexco, IT Tralee and Kerry County Council. Fexco has invested over €21m in the project, which was opened today by Minister of State for Transport and Sport Brendan Griffin, and the CEO of Enterprise Ireland Julie Sinnamon. 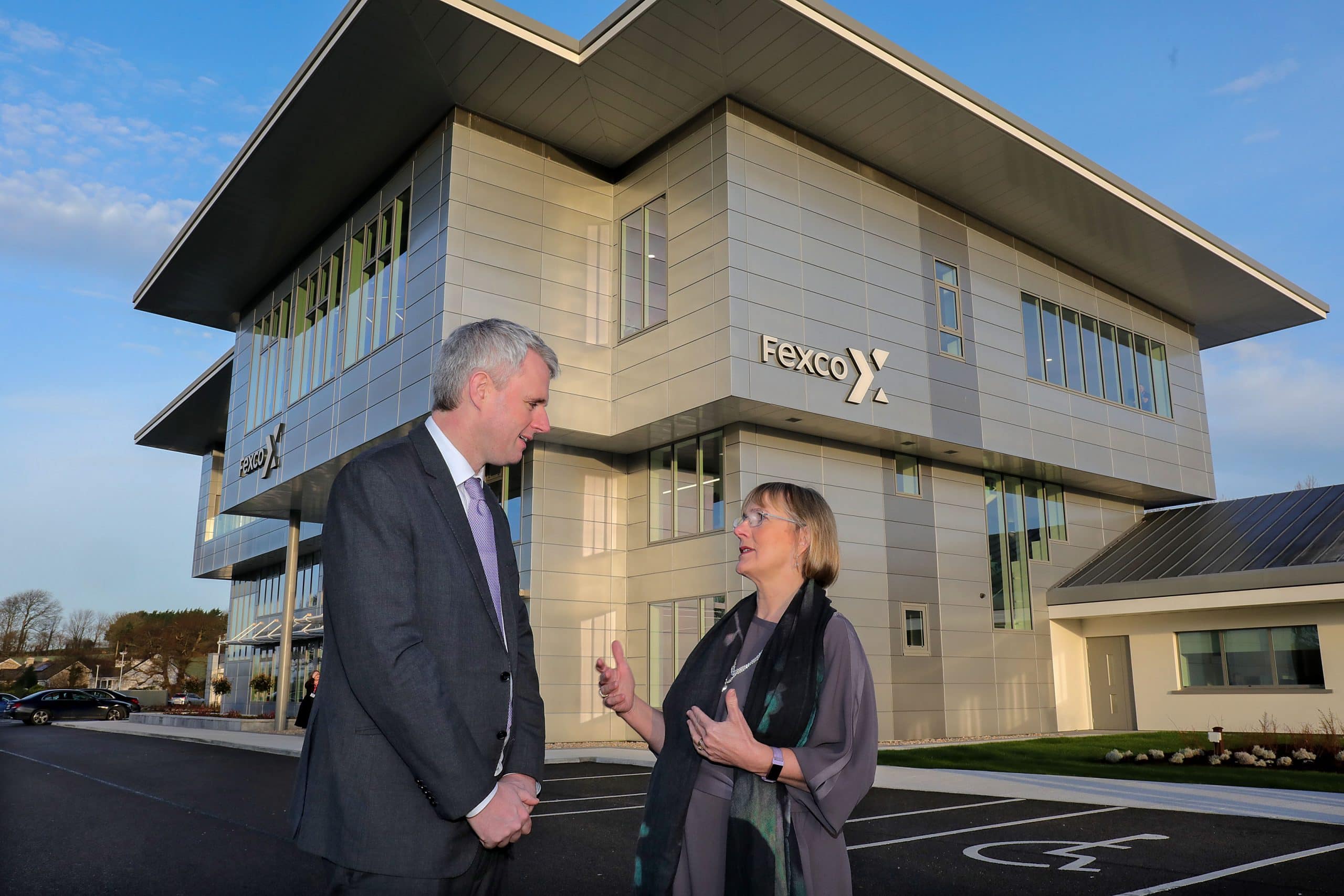 Over 125 Fexco staff will work in 37,000 sq ft of the building that is to house the company’s global R&D, Innovation and IT activities, and is aimed at driving Fexco’s continuing development as a leading global fintech company. The west wing of the building has been donated by Fexco to become of the home of RDI Hub, and house 136 people on its programmes and in its co-location space. RDI Hub was established last year as a not for profit public-private partnership facilitating innovation and start-ups in the fintech and artificial intelligence (AI) sectors.

RDI Hub – which is a not-for-profit public-private partnership- will create over 305 direct jobs by 2024, and in this initial period plans to support the establishment of over 35 high-tech funded start-ups. Its colocation with Fexco’s Research Development and Innovation Centre will add value for both parties through increased availability of specialised labour and knowledge spillovers. RDI Hub will provide training to over 1,300 participants and support 140 apprentices on its programmes in its first 5 years.

The building is dedicated to John McCarthy as a tribute to the Stanford University computer scientist. McCarthy was one of the founders of the discipline of artificial intelligence, and his father was born in Cromane, near Killorglin. In the late 1950s, McCarthy invented LISP, which became the programming language of choice for AI applications. The renowned scientist’s two daughters Susan and Sarah, and his son Timothy were at today’s opening of the building to unveil a memorial plaque to their father.

The site on which the new building has been developed used to be the home of a manufacturing facility latterly owned by US firm Simpson Manufacturing, which closed in 2012 with the loss of 30 jobs. The Government has supported its transformation into a location that will support innovation, growth and entrepreneurship in the Southwest with €3.6m in funding for RDI Hub from Enterprise Ireland.

Commenting on today’s announcement Denis McCarthy, CEO of Fexco said: “This new building signals our commitment to providing world-class innovative fintech solutions to a global audience as well as supporting our local community, through job creation and local investment. Since our foundation in Killorglin in 1981, we have been able to grow our business to employ over 2,500 people in 29 countries, whilst keeping our headquarters and the driving force of the business at home here in Kerry.”

Julie Sinnamon, Chief Executive of Enterprise Ireland said: “The new building Fexco has constructed here in Killorglin is a symbol of the diversification of the economy of the region from its past to a new high-tech future. Fexco and RDI Hub will help strengthen the Southwest’s position as a globally connected financial services and ICT skills hotspot, providing high-quality jobs and supporting innovation and entrepreneurship.”

Susan McCarthy, daughter of John McCarthy said: “It is an honour to be here today and we are very proud to have my father’s work recognized here in Ireland, a country that is very much part of our family’s heritage. My father would have been delighted to see the commitment to innovation and technology that is at the core of both RDI Hub and Fexco’s new centre. It is remarkable to think that the ideas he had about artificial intelligence in the late 50s are now part of a rapidly expanding part of the digital economy.”

Fexco was founded in Killorglin in 1981 and the town remains its global HQ, employing 1,000 out of its total of 2,500 staff across 29 countries. In July 2018 Fexco announced plans to hire 175 new staff by the end of 2021, with roles in ICT engineering, software and sales to help Fexco to serve new product development opportunities.

RDI Hub launched its first round of applications to recruit companies and individuals as members in October 2019. It has now opened a second call for applications from domestic and international high potential start-ups, entrepreneurs, SMEs, academics, local authorities and public sector bodies. The closing date for applications is the 28th of February and you can apply on www.rdihub.com.

Enter your name and email address below and sign up to our newsletter. We’ll only ever send an email when there is something great to shout about!


We use cookies on our website to give you the most relevant experience by remembering your preferences and repeat visits. By clicking “Accept”, you consent to the use of ALL the cookies.

This website uses cookies to improve your experience while you navigate through the website. Out of these cookies, the cookies that are categorised as necessary are stored on your browser as they are essential for the working of basic functionalities of the website. We also use third-party cookies that help us analyze and understand how you use this website. These cookies will be stored in your browser only with your consent. You also have the option to opt-out of these cookies. But opting out of some of these cookies may have an effect on your browsing experience.
Necessary Always Enabled
These cookies are essential for enabling user movement around our website. These cookies do not gather information about you that could be used for marketing purposes and do not remember where you have been on the internet. This category of cookies cannot be disabled. They include GDPR Cookie Consent which is used to store the user consent for the cookies.
Non-necessary
When you visit any website, it may store or retrieve information on your browser, mostly in the form of cookies. Control your personal Cookie Services here.

Functional
Functional cookies help to perform certain functionalities like sharing the content of the website on social media platforms, collect feedbacks, and other third-party features.
Performance
Performance cookies are used to understand and analyze the key performance indexes of the website which helps in delivering a better user experience for the visitors.
Analytics
Analytical cookies are used to understand how visitors interact with the website. These cookies help provide information on metrics the number of visitors, bounce rate, traffic source, etc.
Advertisement
Advertisement cookies are used to provide visitors with relevant ads and marketing campaigns. These cookies track visitors across websites and collect information to provide customized ads.
Others
Other uncategorized cookies are those that are being analyzed and have not been classified into a category as yet.
SAVE & ACCEPT